The History of The Baynards

Dating back to the Victorian era, the history of The Baynards and how it became a luxury apartment building is fascinating. Our story takes us from a humble fur storage company to the evolution of one of the most magnificent fur stores in Europe, frequented by the famous and royalty, through world wars and bomb damage, to its eventual decline and, finally, to renovation and rebirth.

The story of The Baynards, or Baynards House as formerly The Baynards building was known, starts in the 1860s. At that time the site fell across the boundary of the London parishes of Kensington and Paddington. Originally, a conglomeration of houses, shops and other enterprises covered the plot (see this entry in Wikipedia for Chepstow Place). One of these was a cold store for furs, based at 1 Chepstow Place, and run by Samuel Bradley. A cold store was a place where the rich would send their fur coats for storage during the summer months.

In 1896 several of Samuel’s now-adult sons became involved in the business which had evolved into manufacturer and retailer of fine furs. The Bradley and Sons Arctic Fur Store was born. It was not until 1905 that J.E. Stubbs, a prominent architect, obtained permission to redevelop the site. His initial plan was to erect a single building on the Hereford Road side of the plot. Later that year, Stubbs extended his building project onto the Chepstow Place and Westbourne Grove sides of the land. Bradleys Arctic Fur Store had its impressive new residence.

The First of its Kind

Illustration of Bradleys that appeared in The Times, October 28, 1912

The Arctic Fur Store was the first of its kind in the country and grew to be the biggest fur specialist in Europe. Samuel Bradley relinquished control of Bradleys to his sons around 1906 (he was elderly then). However, in 1912 the firm was relaunched as Bradleys (Chepstow Place) Ltd. By then it was already so eminent that the Financial Times carried a whole page editorial on its re-opening (illustration above). After reopening Bradleys extended there range to include a wide range of textile items. Their new products included items uniquely designed for the motorist such as driving coats, driving hats with goggles, capes etc. (Read the whole article from The Time in 1912.)

At the outbreak of WW1, Bradleys was assigned to produce uniforms for the troops. After WW1 Bradleys expansion continued apace. By the 1920s Bradleys had its own in-house fashion designers and tailoring departments and a workforce that had swollen to around 600. The company occupied over nearly six acres of the Westbourne Grove and Chepstow Place sections of Baynards House. It included dozens of workrooms and eighty-six individual fitting rooms  The vast and luxurious range of fur items being offered to the well-heeled had price tags as high as 2,000 guineas, equivalent to over a staggering £100,000 in todays money.

Bradleys would have been a magnificent sight between the wars. It was one of London’s finest couture houses, resplendent in marble, bronze and gold leaf. It even had its own ghost, purported to roam the first floor. 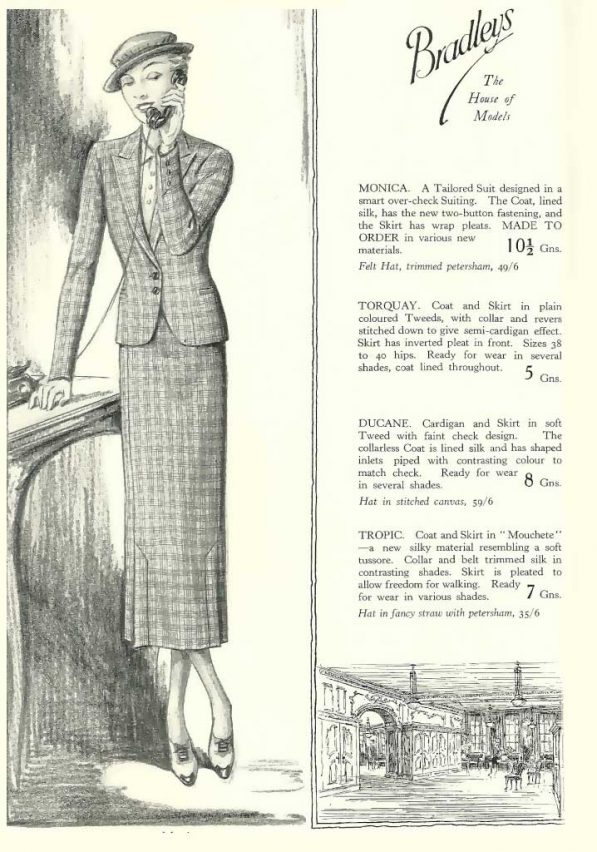 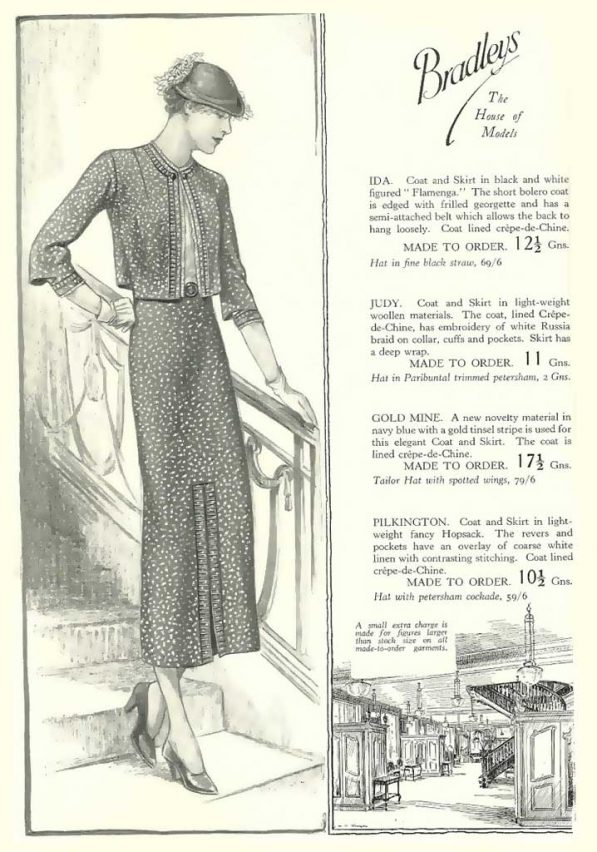 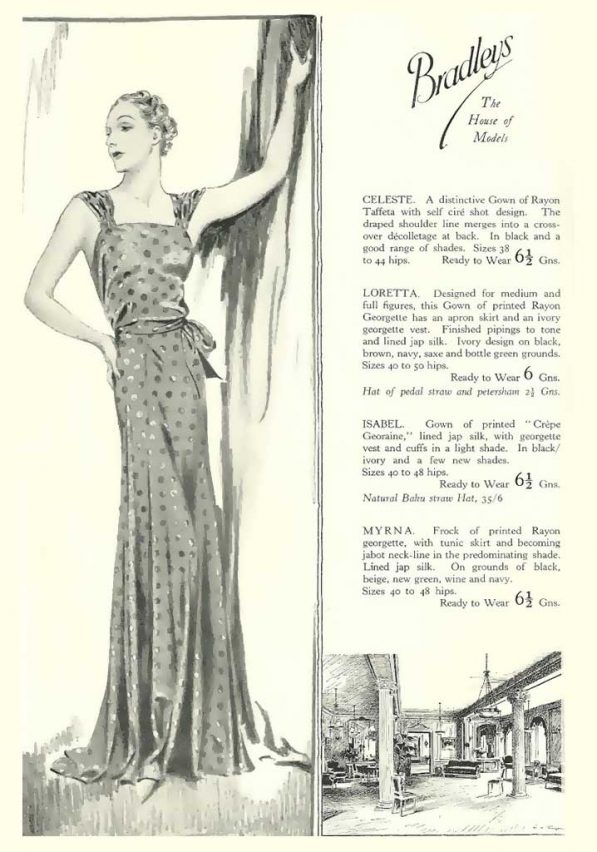 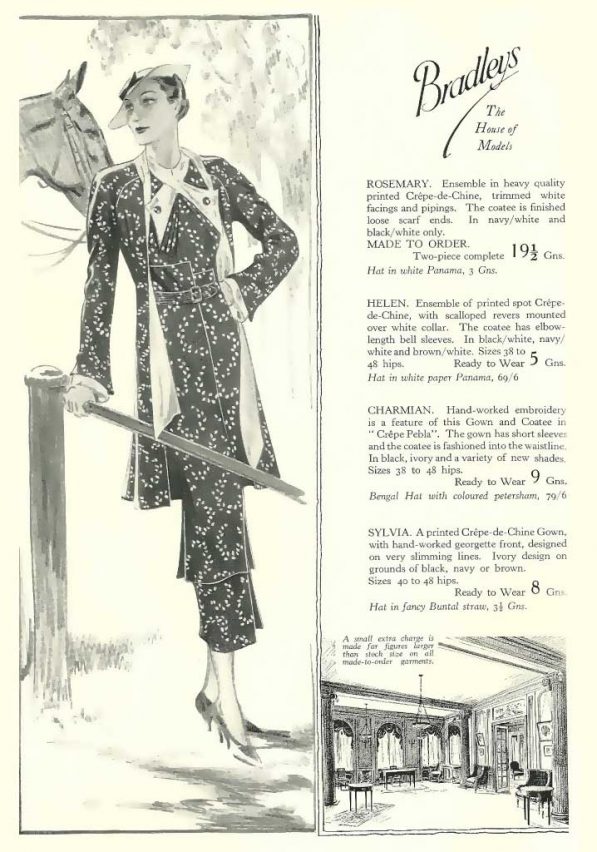 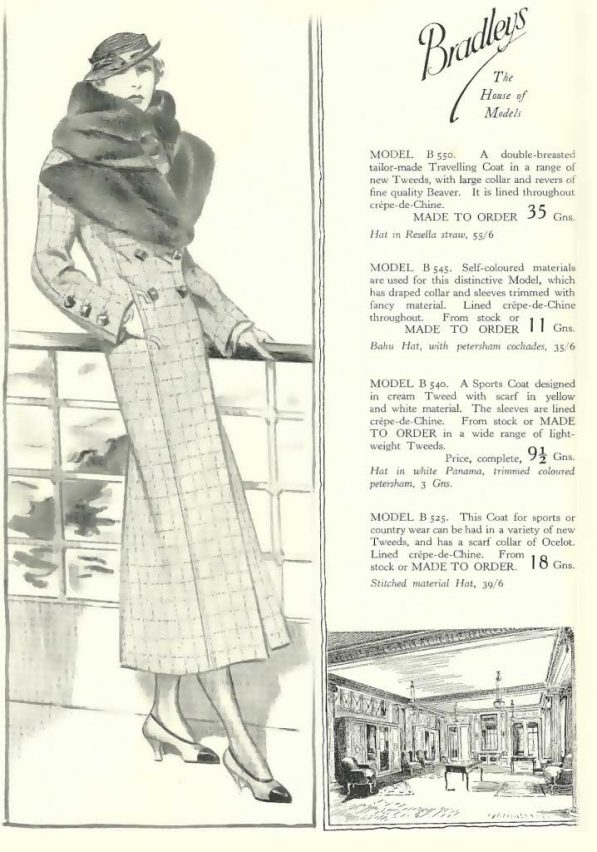 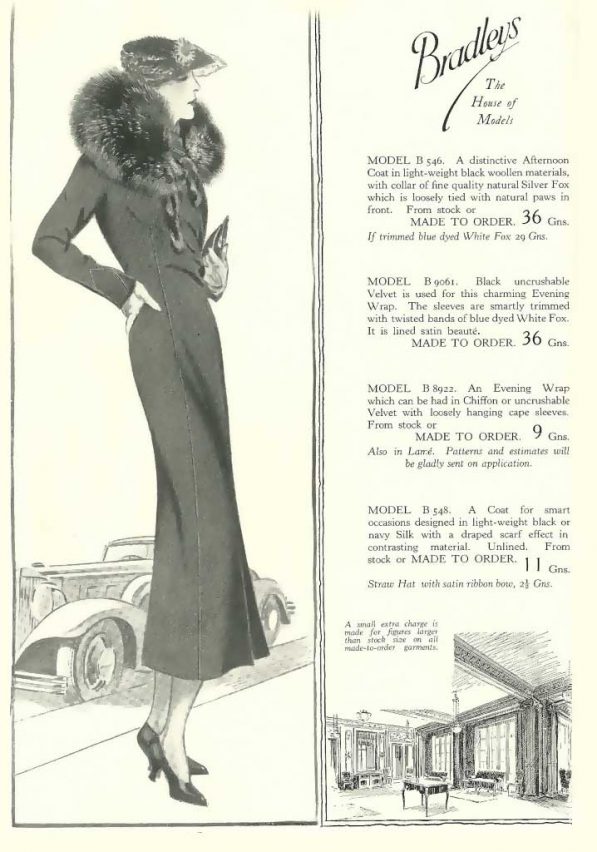 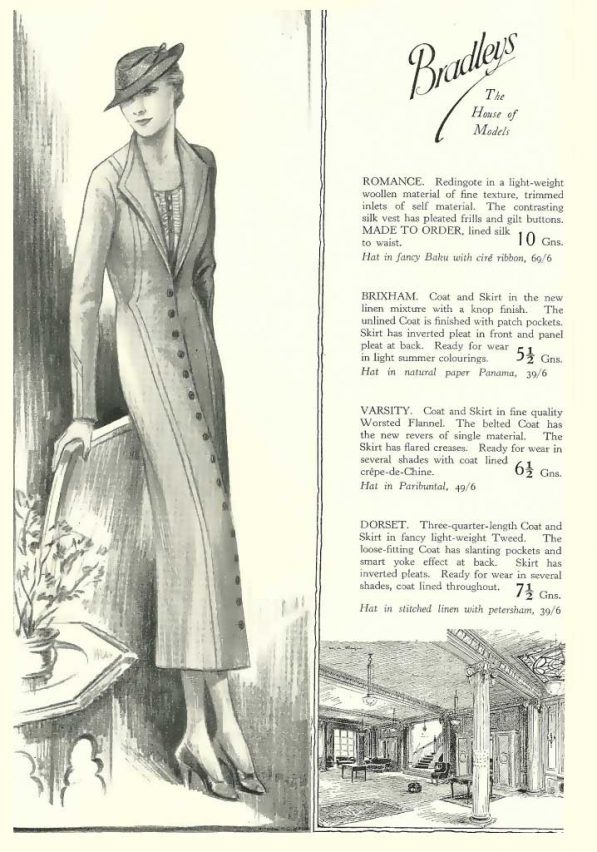 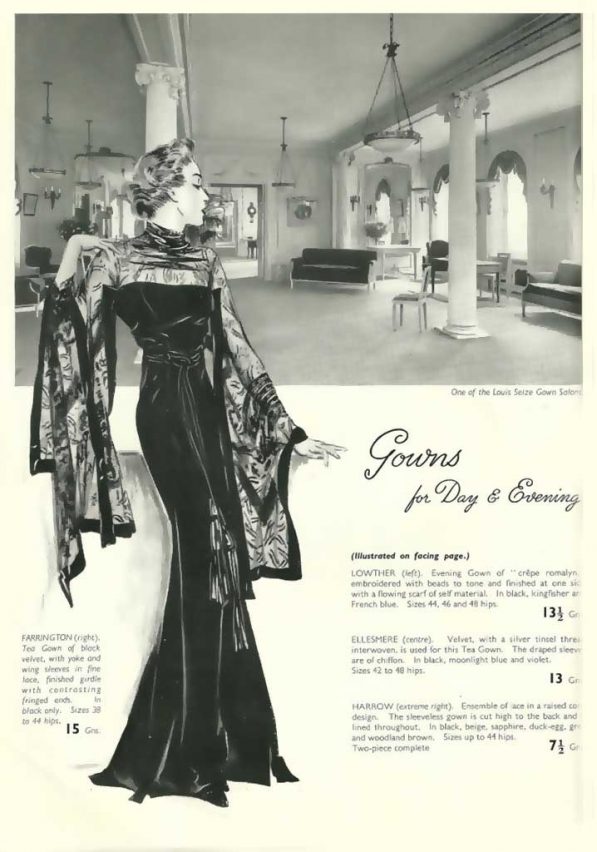 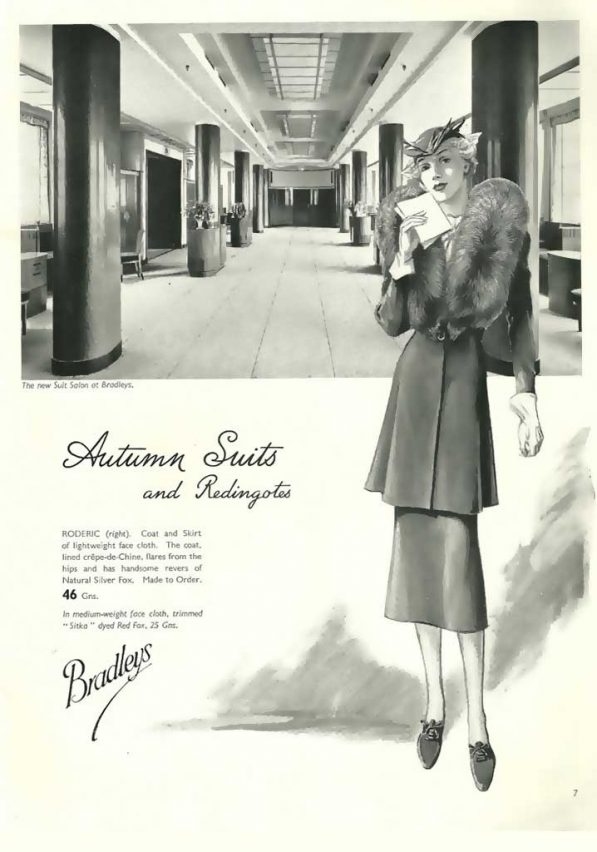 Pages from Bradleys Brochures (1920s-1930s) including before and after refit.

A Long History of Glamour

The glamorous and fashionable lifestyle within this small part of one of the world’s greatest cities is not a recent development. By the 1930s Bradleys clients read like a list from Who’s Who. It included Mr & Mrs Winston Churchill, Hollywood film stars and members of the royal family. It was around this time that Bradleys underwent a significant refit. The entire interior of 1 Chepstow Place was remodelled the  in the Art Deco style. No expense was spared (see images from The Royal Institute of British Architects library). The main mannequins’ (models’ in French) room was situated on the first floor. From here the models and their clothes could be shown to maximum effect as they gracefully descended the grand central staircase to the marbled ground floor reception below. As their catalogue read (shown), Bradleys indeed had become the ‘House of Models’. 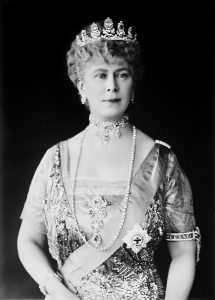 Queen Mary, the spouse to the reigning king, King George V, who lived nearby at Kensington Palace, was a favourite client and a frequent visitor to Bradleys. Her visits were so frequent that a lavishly fitted cloakroom was built for her exclusive use. It was even rumoured that the building’s telephone number, Bayswater 3456, was assigned to aid her memory!

Alas, the magnificence of Bradleys was not to last. At the outbreak of WW2, the building was seconded by Paddington’s local authority as a first-aid post and renamed simply Baynards House. Unfortunately, during the blitz, Bradleys hat-making facility was utterly destroyed. Although the building reverted to Bradleys in peacetime business proved to be difficult. In ravaged post war Britain, even the wealthy had become more cautious with their spending, especially on luxuries such as fur items and expensive gowns. Sadly, Bradleys never recaptured the glamour of its heyday. Finally, the Bradley family moved on to set up a dry cleaning company. Subsequently, the building was sold to the Co-Operative Insurance Society in 1952. Over the succeeding decades Baynards House was occupied by several “grey” government ministries.

The area’s association with a glamorous lifestyle, however, was now cast in its buildings’ magnificent stone facades and the rich and famous who frequented the area. While Her Majesty’s Factory Inspectorate watched from the top floor of Baynards House in the 60s, the notorious Profumo affair was unfolding around model Mandy Rice-Davies’ front door opposite (shown).

Over the years other well-known neighbours have included the character actress Irene Handl and the famous comedian and actor John Cleese (a member of Monty Python and writer and star of Fawlty Towers (pictured) and much more). Notting Hill was synonymous with show business long before Julia Roberts wandered into Hugh Grant’s bookshop in the celebrated 1999 film bearing the area’s name (pictured).

In the 1990’s Baynards House was acquired by developers and restored to create a magnificent space. The Baynards, complete with the original renovated stone facade and a beautiful garden at the rear, opened its doors in 2000. In over century, The Baynards has not lost touch with its unique history.